This involves establishing, on a representative element-scale, the laws describing the Thermo-Hydro-Mechanical behavior of geomaterials while considering the real site conditions (range and nature of the stresses, including possible scale changes).

These means allow to increase the nature and ranges of thermal, hydraulic, and mechanical charges to better calibrate the constitutive models proposed.

Modeling of underground and natural structures:

These models concern the analysis of the evolution, of the stability, and of the failure of underground structures and natural slopes. Each application leads the researcher to consider not only the specificities of the problem but also the scientific progress in the field of modeling (constitutive laws and numerical algorithms).

Depending on the problem defined from the analysis of the real case, the team adapts its own general software packages (CHEF, HYDREF, VIPLEF, PHIMEF …) or develops others, i.e. each package dedicated to a specific problem (ABIS, CYSIF, DEMETHER, GAFIS…), or uses possibly adapted external codes (ABAQUS, ASTER, CASTEM, COMSOL, FLAC, FLUENT…). For multi-physical couplings, the team often develops digital interfaces between several software.

In many fields of application, to provide the most complete solution possible, it is often necessary to consider various structures and to study their behavior by defining the laws that govern their interactions with geomaterials (reinforcement techniques of a rock mass, deformation-buckling-vibration of a drill string, process of cutting a rock, wearing off of a cutting tool, …).

The big work mainly involves the development of specific experimental platforms (test benches for drilling, pulling out reinforcing inclusions from a rock mass, mechanical rock blasting or by very high power water jet, etc.), and by the development of dedicated codes (coupling of the two codes ABIS and DIG3D for the simulation of the static and dynamic behavior of a drilling system in a well with a complex trajectory, implementation of the thermodynamic laws of various fluids in the simulation DEMETHER code for energy storage in underground caverns (H2, O2, CO2, He, hydrocarbons).

The “Geomechanics and Engineering Geology” team of the “Geosciences and geoengineering research department” performs scientific research dealing with:

-use of underground space for the development of infrastructures and/or for storage of energy or waste,

-understanding of geomechanical phenomena at the origin of natural hazards and mitigation of their effects.

These different valorisations of underground ressources need the development of structures (large cavities, tunnels, boreholes, etc.) that are used as part of industrial processes and must meet operating and service criteria comparable to those of the manufacturing industry. This defines areas of research with strong scientific, economic and societal stakes, and that need both experimentation and digital modeling. 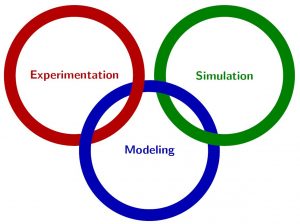 The team develops an approach combining scientific research and industrial applications, based on strong expertise shared around three axes: experimentation, modeling and digital simulation. The interaction between these approaches is aimed at the analysis, design and development of solutions for complex systems, by their multi-physical nature as well as the nature of the geomaterials they host.

Composed of a dozen of researchers, the team develops its activities in a dense network of academic and industrial partners. Industrial partnerships are essential to allow researchers to understand major stakes of the companies that are involved in exploitation of underground resources and as a result to identify the appropriate research programs to lift the locks to which these companies are faced. The team is also heavily involved in teaching: Minor Mining and underground construction or Engineering geology course for the Master of Science in Executive Engineering of MINES ParisTech, MIRIS postgraduate master, and contributions in teaching activities of partner institutions (Ponts-ParisTech, ENS Ulm, Emines in Morocco).

Geomechanics has continuously developed around practical applications in which this discipline could provide real added value. Today, this team's research at the geosciences and geoengineering research department focuses on three main areas with strong scientific and socio-economic issues:

For the last 50 years, the team has been conducting research on the rheology of rock salt in the context of mining operations (traditional or by leaching), as well as for the storage of waste, petroleum products, and more recently, energy. A synthesis of the team’s work was presented in the HDR (habilitation) of M. Tijani (2010) ⟨tel-00430361⟩ and that of A. Rouabhi (2019) ⟨tel-02239077⟩. The laws proposed to describe the thermodynamic behavior of this rock are constantly updated according to the loading type and range expected in industrial operations.

Observations in the laboratory and in situ clearly show that these rocks have a creep-prone behavior, even in the presence of insolubles, with a small irreversible variation in volume. However, this volume variation becomes significant when the number of short stress cycles becomes large, a situation which becomes common during the exploitation of salt caverns, in particular for the storage of energy in the context of the energy transition.

This research required the improvement of our experimental facilities to accurately measure the small variation in sample volume during triaxial testing. A new viscoplastic model with irreversible volume variation has been developed. This model, consistent with the experimental results, clearly demonstrates that the "dilatancy criterion in terms of stresses", commonly used to judge the stability of salt caverns, is neither intrinsic nor conservative.

To model the freezing process of a saturated porous medium, the governing laws are the conservation of mass and energy and the thermodynamic laws of the phases contained in the connected porosity of the medium. Although the scientific literature devoted to this subject is quite rich, scientific obstacles still remain, without even considering the difficulties generated by taking into account the deformability of the solid skeleton. The research performed by our team, highlights the importance of (i) the hyper salinity of the natural water contained in the porous medium and (ii) the high flow velocity due to the hydraulic gradient during freezing.

In the context of industrial applications (freezing of rocky aquifers for the exploitation of uranium mines, construction of an ice wall for the exploitation of an open pit mine, tunnel stability in an urban site, etc.), the work also focused on the development of a methodology to size the network of freezing pipes. To achieve this objective, the complete problem has been reformulated by calling on the theoretical framework of the thermodynamics of multiphase and multi-constituent media and split into two coupled sub-problems: (i) the flow of the refrigerant fluid in the freezing tubes governed by motion laws and thermo-dynamical behavior of various refrigerants, introduced to new in-house software DEMETHER (ii) the phase change of the porous medium and the energy transport term by convection.

To do so a new constitutive law was developed for frozen rock and the COMSOL library was used. The two sub-problems were linked due to the exchanged energy between the freezing tubes and the ground. This coupling required a deeper insight into the physical interface laws as well as the numerical algorithms used to discretize time and space. The team is working on understanding and modeling the processes of cutting and drilling hard rocks in which the performance of conventional techniques is still insufficient, whether in in mining, tunnelling, trenching operations or in oil & gas and geothermal drilling operations. Research includes the development of alternative techniques for cutting even more aggressive rocks: the team is particularly interested in the use of electric arcs of several hundred kV, very high pressure water jets, power laser or sonic drilling techniques by vibrating the drilling head at high frequency.

The team is the only one in France, and among the very few internationally, that carries out important research work on "deep drilling". The motivations lie in the fact that the costs of such drilling are very high, often representing more than half of the investment in oil & gas or deep geothermal project under high pressure and high temperature.

The team has set up a research program designed to simulate the behaviour of the entire drilling system from the tool cutter that is in contact with the rock at the bottom of the well and causes its destruction, to the rotation table at the surface. Models describing in 3D the dynamic interaction between the drilling bit and the rock are developed and are integrated into numerical modelling to simulate the behaviour of the drillstring, a slender metal structure that can deform, rub, buckle and vibrate inside a well with a complex trajectory including tortuosity and micro-tortuosity.

To carry out this research program, the team has been developing, for more than 30 years, a drilling laboratory located in Pau/South of France. Various devices have been developed and are continuously extended to simulate drilling processes in deep/hard rocks. More efficient drilling technics under high confinement are sought and evaluated (adaptation of the percussive process to deep drilling conditions, stresses relaxation process on the bottom hole, high pressure water jet assisted drilling, etc.)

Laboratory staff include a Doctor/Engineer and two full-time technicians. They are often joined by PhD students and Postdoc for conducting and supervising the testing programs they coordinate. Because of its exceptional nature, the laboratory is frequently visited by engineers from partner companies. More punctually, it welcomes partners within training programs of their drilling engineers.

To date, it is the only independent laboratory of this size worldwide with the following major equipments (see ABCD on pictures above):