Migration-based imaging techniques aim at characterising the subsurface by analysing focusing panels such as Common Image Gathers (CIGs), whereas Full Waveform Inversion relies on the misfit between observed and synthetic data. In essence, migration-based techniques assumes a scale separation between the large spatial scales (background model) and the short scales (reflectivity images). The first step consists of producing a series of images, for example from subsets of the input data. For a correct background velocity model, these images are expected to be consistent (Symes, 2008).

We investigate and develop two new aspects in this context: (1) the direct inverse approach to create the reflectivity images, and (2) the extension beyond reflected waves. The direct inverse

can be used as a preconditionner for the FWI approach. This is an important element for the stochastic approaches;

Figure 1: Inversion in a model with a low velocity anomaly (−900 m/s): a) velocity model and interface positions, b) inverted reflectivity after summation over all subsurface offsets, c) observed data dobs, reconstructed data and e) extracted traces from c) in solid black and d) in dashed red, for offsets 100 and 550 m. 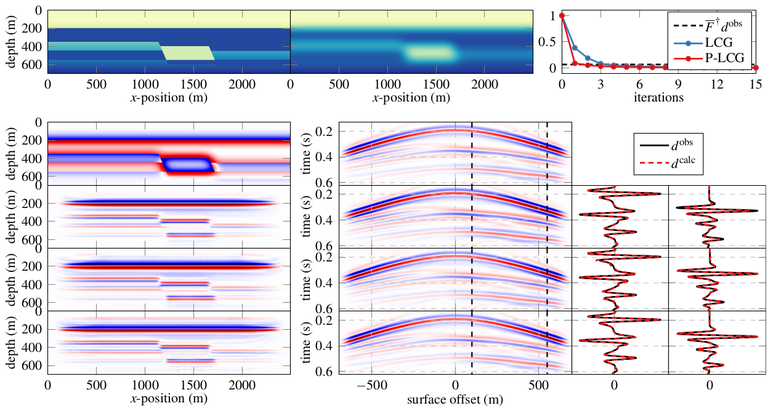